“Wichita, the largest city in Kansas was incorporated in 1870. Early economic growth began with the extension of the Santa Fe Railway and the expansion of the agricultural industry. In the 1950s, Wichita secured its role as a leading producer of general aviation and commercial aircraft with the activation of McConnell Air Force Base. Just as the Wichita economy grew throughout the years, so did its population. This continued growth has challenged the city to provide better and more efficient services, including an improved water treatment facility.”

“The city’s water treatment plant was in need of some major upgrades. Frequent splash from corrosive solutions including liquid chlorine and a fifty-percent sodium hydroxide solution, a standard part of the water treatment process, had seriously eroded the metal gratings, handrail and stairways around the plant. This erosion caused the metal gratings to become slippery and unsafe which could lead to potentially hazardous situations, so the city decided to find a product that would provide a safe, long term, cost effective solution.”

“The City of Wichita chose to upgrade its water treatment facility with a product that would protect against costly corrosion and provide a slip resistant surface. Fibergrate’s VEFR Safe-T-Span® pultruded grating and stair treads were chosen to replace steel in several sump areas, stairways and on two access platforms. The access platforms also incorporated Fibergrate’s Dynaform® Structural Shapes and a Dynarail® three-rail handrail engineered to meet the city’s requirements. The operations manager of the facility was pleased with the appearance of the product and stated that not only do the Fibergrate products handle the cold winters well, but similar to the growth of Wichita, Fibergrate’s FRP products continue to thrive.” 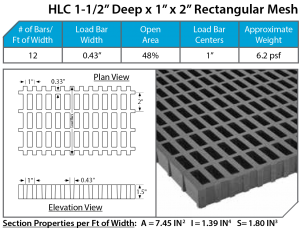