“Coca-Cola® originated as a soda fountain beverage in 1886 selling for five cents a glass. Early growth was impressive, but it was only when a strong bottling system developed that Coca- Cola became the world-famous brand it is today. The Coca-Cola bottling system grew up with roots deeply planted in local communities. This heritage serves the Company well today as consumers seek brands that honor local identity and the distinctiveness of local markets. As was true a century ago, strong locally based relationships between Coca- Cola bottlers, customers and communities are the foundation on which the entire business grows.”

“There are frequent washdowns at the facility causing the floor to become wet, thus creating a slip hazard for workers. When considering flooring for their facility, Great Plains Bottling Company needed a material that was slip-resistant.”

“Fibergrate’s molded grating provides the sure-footed surface required for worker safety. Vi-Corr 1-1/2” deep, 1-1/2” square mesh grating was installed as a wide platform on both sides of a packaging unit for 2-liter Coca- Cola bottles. Grating was also used along the filling equipment and conveyor lines as narrow walkways. The grating’s natural resilience is also beneficial in that it can lessen worker back and leg strain. Not only was the product easy to install, but the standard warm orange of Fibergrate’s Vi-Corr® molded grating closely resembles the red color of the Coca-Cola® label. The Great Plains Coca-Cola Bottling Co. plant is just one example of how Fibergrate products can enhance the appearance of any facility.” 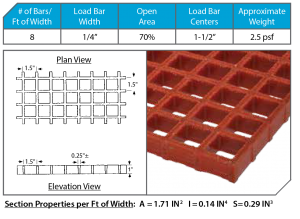 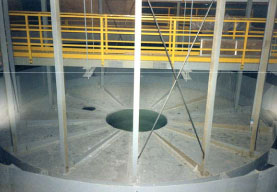